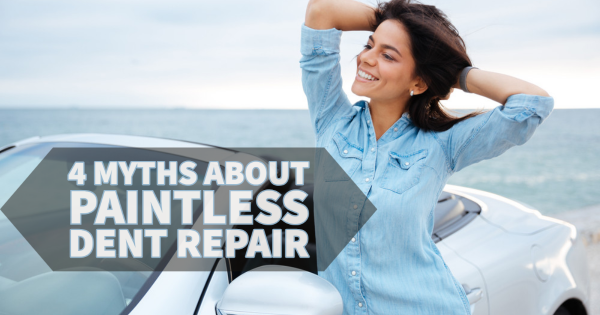 Regardless of how careful you may be while driving, getting large dents or small dings happens. Even if you always park your car in the right places, you can’t always escape careless drivers who may park close to you. The good news, however, is that technicians can quickly remove most dents with a technique known as paintless dent repair, or PDR.

Before clarifying some common misconceptions surrounding PDR, it is essential to understand how it works. Paintless dent repair is a process where a trained technician applies force to the underside of the dent to work it out until the dent cavity is gone. The repair only takes a few hours and has no detrimental effect on your vehicle’s integrity or appearance. In fact, it does no damage to your high-value factory finish paint job, and eliminates the need for sand or fillers to fix your car. Let’s look at some popular myths regarding paintless dent repair.

Myth #1: Any Company Can Do PDR

There are many different companies out there that claim they can fix dents, but this doesn’t mean you should use their services. You should choose a company that specifically specializes in paintless dent repair and employs trained PDR technicians. This way, you can know you’re getting the best quality work done to your vehicle.

If your fender or bumper needs dent repairs, you can easily file a repair claim with your insurer. Even if you decide to go with PDR to fix your dented vehicle, your auto insurance company will pitch in their share. In fact, many insurance companies prefer PDR because repair costs are lower, meaning they don’t have to shell out as much money to you for dent repairs.

The internet offers valuable resources on many topics, but it also contributes to many failed DIY repair attempts. Sadly, we’ve seen some attempts end up causing more damage than what was there before. Many people don’t realize that DIY attempts can put their factory paint job at risk; if the paint gets damaged, then vehicles are no longer eligible for PDR. Rather than waste time and jeopardize your vehicle’s value, turn to the PDR professionals.

Paintless dent removal is a game changer in the auto industry because it helps restore your car to its original state without adversely impacting your pocket. There are many misconceptions out there about the PDR process, but as you can see, they are merely unfounded myths. Now that you know the truth, give us a call at Dent Shop today to schedule your free PDR estimate.