Choose Bodyshop Alternative PDR: No Paint, No Parts, No Bondo 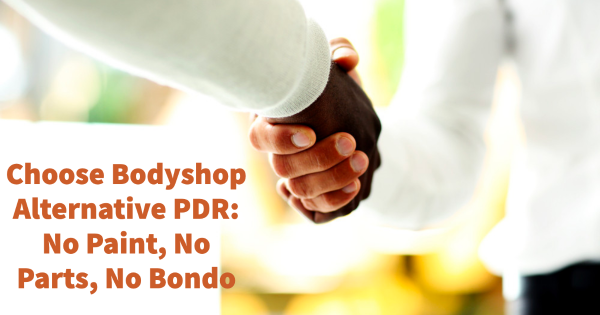 Paintless dent repair, or PDR, is a modern vehicle dent repair process favored by drivers and insurance companies alike. It is an alternative to traditional auto body repair techniques that involve filling and in repainting over outer panel damage, resulting in loss of value. By comparison, PDR doesn’t require the use of paint, parts or fillers. Instead, PDR uses special tools to remove dents from the metal panels of your car like the damage never existed. Below are a few reasons to choose PDR over traditional auto body repair.

PDR doesn’t require the use of paint, which means there isn’t a risk of paint overspray or damage to your car’s finish. Paintless dent repair leaves your car’s original paint intact, which is desirable for many reasons. Firstly, it maintains the value of your car. Secondly, it preserves the factory finish warranty, which guarantees your vehicle’s original paint will last a certain number of years. In addition, it’s a more environmentally friendly option than traditional auto body repair since the conventional repainting process introduces chemicals into the air.

Auto body shops tend to opt for replacement parts when the dent is too difficult to fill in and paint over. Since paintless dent repair involves fixing the dents and dings in the existing panels, you won’t need to order and pay for expensive matching replacement parts, which could also take a while to ship. Because PDR doesn’t require the use of parts or fillers, it’s a much more cost-effective option than traditional auto body repair.

Bondo is a type of filler that is often used in traditional auto body repair techniques. It’s also important to note this is a cosmetic repair, and does not actually fix the damage to the dented metal. Bondo is made from a mixture of fiberglass and resin, and it’s used to fill in dents and other damage to the metal panels of your car. However, Bondo isn’t as strong as the metal it’s filling in. This means that Bondo can crack and break away from the metal over time, leaving your car vulnerable to further damage. PDR does not require the use of Bondo, which means that your car will be stronger and more durable after paintless dent repair.

PDR is a much faster option, as traditional auto body repair can take days or even weeks. For traditional repairs, consider how long it would take to prep the surface of the dent (by scraping away the existing paint), applying filler, painting over it, allowing time to dry, then repainting again. It’s a time-consuming process with many steps. Then, think about how easily an auto body shop gets backed up with work. It may to a while to even get your dented vehicle in the shop! By comparison, PDR technicians can usually fix dents in a few hours, depending on the complexity of the repair.

Opt for Paintless Dent Repair to Fix Your Dents and Dings

PDR is a much more convenient, budget-conscious and environmentally friendly option than traditional auto body repair. When your car is dented, your first instinct may be to take your car to the nearest auto body shop. However, consider taking your car to a paintless dent repair shop instead! Contact Dent Shop for a free estimate.