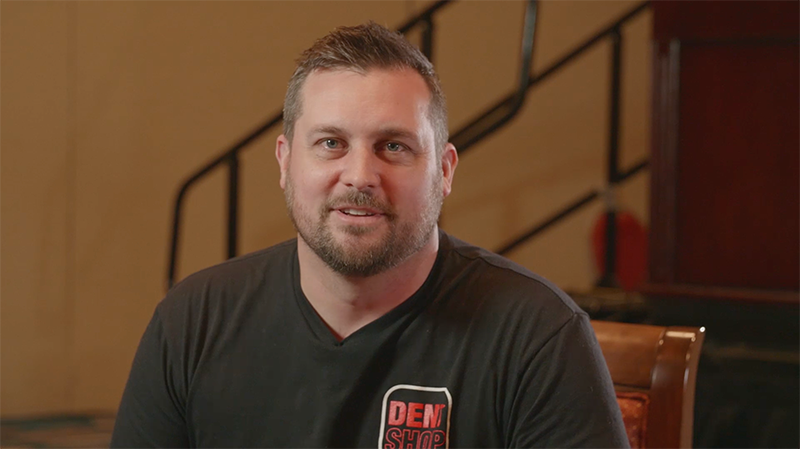 Please note: This article was originally published by Mobile Tech RX and had been reposted with permission.

Paul Kordon is the owner of Dent Shop in Northern Virginia and creator of his own PDR price matrix. Learn more about his PDR journey and a few lessons he’s learned along the way.

Finding a Passion in PDR

Paul has a friend to thank for introducing him to the auto recon and PDR industry. About 20 years ago, Paul was newly married and selling education loans. While he liked sales, he didn’t enjoy sitting behind a computer all day. So when his friend suggested showing him paintless dent repair, he was eager to learn more.

“It’s a new scene every day—new car, new dent,” Paul says. “I decided to give it a shot and never looked back. I would call myself a career dent guy now.”

From the moment he started training in PDR, Paul knew he’d found his passion and he’d do whatever it took to make it happen. But he hadn’t anticipated he would be in the industry for life.

“I didn’t know I would be in it, at this point, for 21 years, and looking back on it and saying I don’t regret anything,” he says. “I really enjoy this industry and I’m looking forward to the future of it.”

Paul came up with the Paul Kordon price matrix as a way of addressing a problem he was experiencing first-hand.

“I was operating as an independent technician and what I found was that there was no process for me to estimate damage. The estimates were primarily arbitrary numbers that would come out of my head, depending on how I felt or what I thought about the damage that was sitting in front of me.”

The key challenge with his previous off-the-cuff approach was that there was no consistency to his estimates. And that meant there was a larger margin for error and the risk of undervaluing the work. This frustrated Paul so he decided to do something about it.

Over time he developed his own price guide process, adding more details as he went. And finally, the Paul Kordon price matrix was born. By creating a process, he was able to come up with consistent and accurate estimates quickly and efficiently every time. His process takes into account three key factors: the size of the damage, the variables that affect the damage, and any removal and installation requirements.

As Paul became more entrenched in the industry he realized that he had no real concept of how his pricing might compare to others. And when he started asking questions, he noticed there was a lot of disparity between PDR professionals.

“I found that there were a lot of talented guys who weren’t charging enough for their work, in my opinion,” he says.

When he gave his feedback, they were always keen to hear how they could be making more money. And that’s when he started sharing his pricing guide.

The Paul Kordon price matrix has now been widely adopted across the PDR industry. It’s even been integrated into Mobile Tech RX’s estimating software.

While he is happy to have moved away from his office job, there were skills Paul developed there that he has taken with him into PDR. He credits his ability to sell himself as a huge asset and accelerator to his career now.

“If you can sell yourself, then you can sell anything,” he says. “People will buy anything you’re selling if they buy you.”

Although sales came pretty naturally to him, he advises those entering the industry to be confident in the value of what they’re doing.

“What I always try to encourage guys to remember is the amount of time and energy they spent getting to that point where they can fix a small ding to perfection in just a few minutes,” he says. “I believe, according to the price guide, that a small door dent that you can fix in just a few minutes is worth a certain amount of money.”

2. Educate as You Estimate

There is often a disparity between the value of the work from a professional’s perspective and the customer’s. So Paul’s mantra is to educate as you estimate. That’s because customers will only see value in something they understand.

“We should be explaining the process, explaining what is happening with their vehicle,” he says. “What’s great about a tool like Mobile Tech RX is that it gives us data to back up what we’re saying.”

At Dent Shop, Paul and his brother have tried to instill a customer service focus in their culture, their team, and everything they do.

“I think it’s in helping the team understand that we’re here to serve people,” he says. “That our business is more about people than anyone else. And if we can get the people part right, then the transactions will come.”

Paul has been driven by the potential for advancement in the industry as a whole. For this reason, he has taken advantage of technology whenever he can.

“We are always on a mission to find ways to make things faster and easier for people,” he explains. “Not just for our customers, but we’re also looking at our business and the choices we make in our investments in technology from that standpoint. What is going to free up our time to make our jobs faster and easier?”

After all, running a PDR business takes a lot more than the ability to do repairs. As Paul learned after years of being an employee, there are many responsibilities that come with running your own business – from having the right insurance to managing your finances to sourcing your team.

“Before you know it, you’ve got a full-time job just managing and building a company.  And that’s when you dig and you start to look for tools.”

A Bright Future for PDR

One of the biggest rewards he’s experienced since deciding to run his own business is the innovation in the industry from PDR tools to new technology. He sees huge potential in the future of PDR. He also has a lot of faith in the next generation of PDR professionals.

“They’re younger, they’re more agile, and they understand digital better than generations before mine,” he says. “I think they have massive opportunity. I think the learning curve is shorter. The tools are getting better. With the help of the internet and the digital age, the opportunities are endless.”

Although technology has helped him to grow his business, he also advises newcomers to remember the importance of human interaction, too.

“I’d tell them not to be over-dependent on technology,” he says. “Develop some people skills, some selling skills, some ability to look a person in the eye, shake their hand, and sell yourself. If you can sell yourself, you can probably sell anything.”

In fact, if he could change anything from his past, it would have been to focus on developing his sales and leadership skills earlier in his career. That’s because a large part of Paul’s success has been centred on his philosophy of customers first. He believes that the key to higher prices in the industry as a whole will come from a professional approach to customer service.

When business owners are organized, detail-oriented, and have a consistent process for estimating, they show that they take their customer’s needs seriously. And customers, in turn, will see the value in the services being provided.

“I think that what it comes down to is that customers want to know that the people who are making their repairs on their cars or detailing their vehicle really care about what they’re doing.”