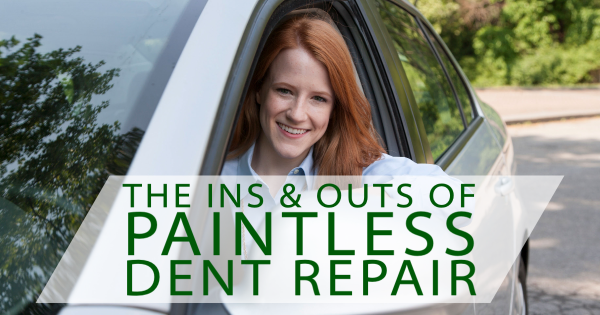 Paintless dent repair, also known as paintless dent removal (PDR), is the quickest, most cost-effective and least intrusive method of repairing automobile dents. Many people are unfamiliar with this modern dent repair method, how it works and why it’s preferred over traditional techniques. Let’s take a look at PDR and its benefits and characteristics.

How Does PDR Work?

First, professionals inspect the car’s damage. Where is the ding? How deep is the dent? What is the nature of the damage? They begin the repair after examining the damage and determining if PDR can efficiently repair it. 80-90% of all dents can be removed with PDR.

Once your vehicle is inspected, the technicians will get to work. Paintless dent repair is the name for repairs that don’t require repainting, as such it can include massaging the metal back out or using a glue-pulling method to reshape the panel. In most circumstances, PDR involves removing body panels, tail lights or interior panels as needed to expose the backside of the dent in order to effectively massage the damage out.

Specialized lighting shows the specialist where to place tools behind the dent to massage the body back into line. Finally, they press and massage the metal slowly to remove the dent. This method restores the dented exterior to its original position and doesn’t require any repainting. The PDR technique can often be used to perform same-day repairs depending on the severity of the dent, and the results are astonishing considering how non-invasive and rapid it is.

PDR is a modern auto repair option, used on new, pre-owned, service and performance vehicles. Paintless dent repair is ideal for vehicles damaged by hail or shopping carts or any other debris or item causing small to large dents. PDR has numerous advantages over conventional dent removal because:

Traditionally, dents used to be “repaired” by a method that simply eliminated the appearance of the damage, which in reality was only a cosmetic fix. In the past, conventional methods required the use of body filler material, then several layers of repainting to cover up the dent packing job. The final layer of paint is supposed to match the rest of the vehicle’s appearance. While this method can fix the look of a car, it does not treat the underlying cause of the dent.

Traditional methods are time-consuming, costly and are detrimental to your vehicle’s resale value. This is because the traditional “fix” may not last long – repainting can be prone to error, and unfortunately the paint can fade in the sun, bubble or scratch. Luckily, modern paintless dent repair requires no fillers, sanding or repainting. PDR is an excellent approach to care for your vehicle’s exterior while saving money.