What Types of Auto Damage Can PDR Fix? 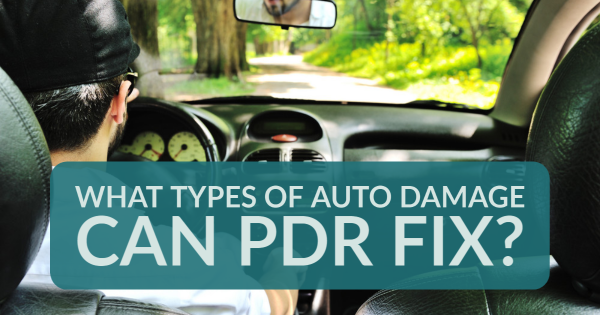 Did you know that almost 90% of dents can be repaired using paintless dent repair (PDR)? Even though a wide variety of dent removal can be accomplished with PDR, it pays to fully understand if your auto damage can be repaired before you take it to a technician. Let’s learn a little bit more about what factors affect whether paintless dent removal can take care of your auto damage.

Dent complexity plays a big role in whether or not PDR will be able to solve your auto damage problems. When we talk about complex dents, we’re typically not referring to minor car hail damage. A complex dent has two components that a PDR technician will need to assess: creasing and depth.

Dent creasing occurs when part of the exterior of your vehicle has been bent or squeezed together. For instance, if the hood of your car was bent to the point where a crease occurred in the hood, it would be difficult to get that ridge out of the metal without replacing it completely. Whether or not PDR can fix a creased dent is up to the technician and the size of the dent.

Dent depth also plays a critical role in determining whether PDR will be a feasible repair method. Shallow dents are typically easier to repair than deep dents, no matter what type of dent repair you’re investing in. When a dent is very deep, it’s possible that the car’s paint has been compromised. If the paint hasn’t been compromised, your PDR technician will likely be able to fix this for you. It’s also important to understand that if your factory finish paint is damaged, then the exposed metal can and will rust. The term “paintless” mean that dents are removed without harming or altering the paint, which cannot be done if there’s exposed metal that will require repainting or panel replacement.

Cause of Vehicle Dents

The cause of your dent may also play a role in whether PDR can be used as a solution or not. For instance, car hail damage, especially from smaller hailstones, is a common reason to use PDR. The larger the hailstone is, the bigger the dents will be. Since hailstones are mostly rounded, the dents they leave behind don’t usually leave a crease. These dents are typically round, shallow and easier to pop out with PDR techniques. Dents from door dings and debris are also great candidates for PDR because the dents are typically shallow and the car’s paint isn’t compromised. Sports accidents, such as a baseball or basketball hitting your car, can be fixed with PDR techniques as well. Much like hail, these objects will leave a shallow, round impression in your car that typically doesn’t compromise the exterior paint.

Whether you need PDR to repair damage to your vehicle ultimately depends on the nature of your car’s dents. For all of your PDR needs, don’t hesitate to contact our team at Dent Shop today for a free estimate.