Why Paintless Dent Repair Is Worth Your Time 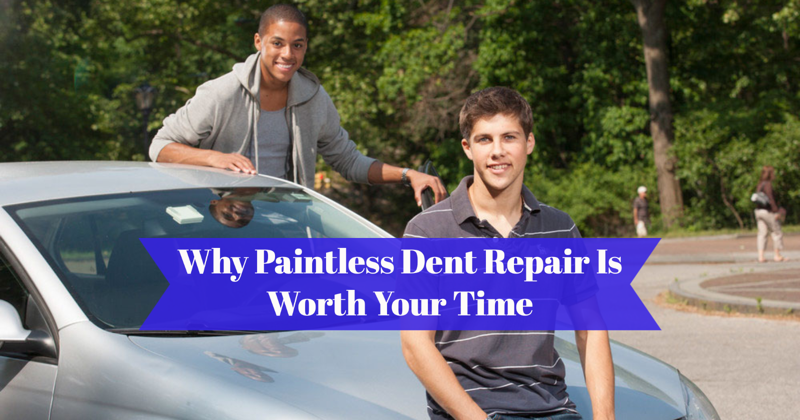 Due to inclement weather, natural causes, accidents or debris, vehicles can pick up noticeable dings, dents and creases that lower its worth. It’s often an aesthetic issue that most vehicle owners consider a hassle to have repaired. However, that’s because many drivers don’t know about the modern dent repair method that’s taking the country by storm: paintless dent repair. In fact, it often takes some before and after photos to illustrate how effective this repair method is. The results are well worth it – let’s look into why below.

The reason why people are often able to justify seeking paintless dent repair (PDR) is because it’s quite efficient. This type of dent repair typically doesn’t take more than a few hours to complete, but the results leave your car looking like it’s never been damaged. Additionally, PDR will ensure that your paint job remains intact. You won’t need to find an alternative method of transportation while repairs take place, which is a huge selling point.

As previously mentioned, the paintless dent repair method doesn’t disturb your car’s paint job. Therefore, your car will often end up looking aesthetically better at the end of this method than it would if the dents were left. Furthermore, a vehicle with the original paint job intact is worth significantly more than a repainted vehicle. This is because a secondary paint job after filling in a dent with traditional methods is highly likely to be imperfect, noticeable or appear faded after time. A repainted vehicle shows potential buyers that the vehicle has been damaged once, may be hiding internal damage and will possibly need repainting (again!) if the secondary paint job deteriorates in quality or appearance after awhile.

Your PDR technician will complete your dent repairs thanks to reusable tools, as opposed to traditional methods which require sanding and grinding away paint, using body filler, then repainting several layers. A major benefit of paintless dent repair is that it releases fewer chemicals into the environment. Additionally, no paints or paint thinners are used in the process, which have toxic fumes that can harm the environment. For some, this in itself justifies using the paintless dent repair method.

Paintless dent repair offers a higher value result and is overall more affordable because no paint or filler material is used in the process. This repair is also a quick fix most of the time, depending on the location and the severity of the damage. This efficiency also contributes to lower labor costs. Simultaneously, since PDR can often be completed in one day, this means you likely won’t need a rental car or having to find alternative transportation for days on end. PDR is the smart, faster and more affordable choice for dent repairs, making it the perfect body shop dent repair alternative.

If your car or motorcycle has been dented, consider paintless dent repair. It could make a major difference in your vehicle’s value and appearance. Reach out to Dent Shop if you are in need of expert paintless dent repair from trusted experts – get a free estimate today.