Why Repainting Devalues Your Vehicle 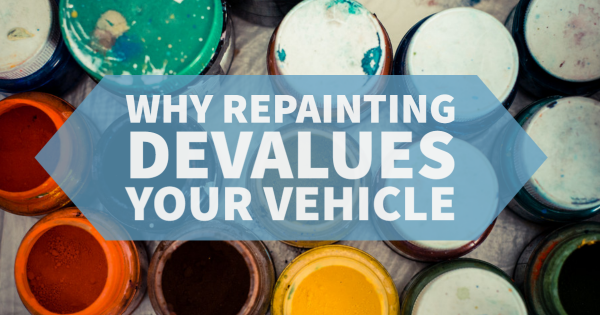 A car that has never been repainted reflects well on its previous ownership and maintenance, plus its lack of accident history. When it retains its original coat of paint, it can therefore be worth a lot more because of the implication that it’s been taken good care of and doesn’t have hidden damage. When your vehicle gets dinged and dented, opt for paintless dent repair (PDR), which does not involve repainting! That said, read on to see some reasons why painting over dents may do more harm than good and end up devaluing your vehicle.

Repainting Takes Away the Originality

First and foremost, repainting a car takes away its originality. This is because it’s highly difficult for auto body repair shops to match the exact shade and adhere to the stringent standards that the manufacturers put into the original paintwork. It’s fairly easy for dust and other debris to get caught in the repainting job, making even a matching shade appear imperfect to the naked, untrained eye. Also, a repainted car is worth much less to potential future buyers.

Repainting May Void the Warranty

The original factory finish paint is guaranteed to last for a certain number of years, protecting your car’s metal panels against the elements, rust and other chemical damage. Scraping away the original paint to apply filler in the dent, cover it up and repaint over the ding invalidates that warranty. Now, you cannot be sure the repaint job – the first layer of protection – will last as long as the original paint. That’s why having your vehicle’s dents fixed at an auto body repair shop generates a CARFAX report: because the condition and value of the car have now degraded irreparably. Choosing paintless dent repair instead of auto body repair helps you avoid repainting and diminished vehicle value.

Finally, repainting a car takes a lot of time and money. Because the process requires many steps and a fair amount of time to complete, the labor cost alone is quite high. In addition, you have to factor in the cost of materials, as well as what you’ll be shelling out for a loaner car while yours is being repaired. The expensive cost of auto body repairs plus the diminished worth of the automobile makes for a poor combination for your wallet.

With the market for automotive collision repair expected to cross $280 billion by the year 2024, according to Globe Newswire, it’s clear that having a car repainted is becoming more expensive by the day. For this reason, and the others listed above, many car owners are choosing PDR instead of traditional dent repair and repainting.

Clearly, it’s a lot better to avoid having to repaint your car if you can. Luckily, PDR can correct most dents, eliminating the need for repainting. PDR preserves the factory finish paint and the value of your car. Are you in need of PDR services that won’t devalue your vehicle with repainting? Get in touch with us today at Dent Shop for a free estimate.