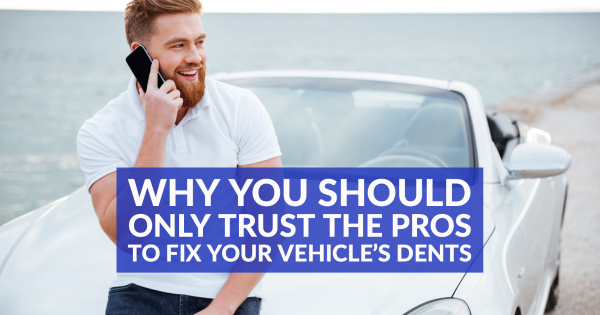 Despite safe driving and cautious parking, at one time or another your vehicle will likely end up getting dents or dings. The majority of dents are caused by fender benders, while some are caused by car doors, small stones, road debris, sports balls and even super market carts. Once you notice a dent in your vehicle, you need to get it fixed as soon as possible. Some people can be tempted to perform dent repair on their own, but it is not advisable and here’s why.

DIY Can Worsen the Damage

When you attempt to fix dents on your own, you can end up worsening the damage. This is one of the main reasons why you should leave dent repair to skilled experts who are trained in dent repair. Most people who attempt to do the job themselves find Youtube plunger or dry ice videos, or use dent removal kits that lift the dent out of the vehicle’s bodywork. However, untrained individuals can end up stretching the metal too far, if the process even works at all. Once that happens, the panel may need to be replaced completely.

The most important reason not to attempt DIY dent repairs is because of your factory finish paint. If you attempt to repair dents on your own, you can end up removing the paint. The paint on your car comes with protective coatings that shield your car’s metal panels from rust. Most vehicles come with a factory paint warranty due to the quality of the paint, which is guaranteed to last for years. The warranty will be voided if you damage the car yourself in the process of trying to repair a dent. Get your car fixed properly so you can save your warranty and keep that prized paint finish intact.

A Professional Maintains the Value of Your Car

Professional paintless dent repair technicians know how to remove dents from your vehicle while keeping the paint intact and without stretching the metal. Since we’ve already discussed the value of your vehicle’s paint, it’s important to seek a dent removal option that preserves that factory finish: paintless dent repair (PDR). If you plan on selling your car sometime in the future (or even if you don’t), you need to preserve its value so you can sell. Attempting a dent removal job on your own can significantly reduce the value of your car. This is because DIY dent repair never goes undetected. Any professional appraiser or even an attentive individual buyer with half an eye will notice such damage, causing them to doubt the condition of your car.

These are some of the most important reasons why you should leave dent removal to the professionals. There are lots of expert paintless dent removal shops across the country, so chances are high you can Google “PDR shop near me” and you’ll find a reputable one within driving distance. If you find dents or dings on your car and need professional PDR, reach out to our team at Dent Shop today for a free estimate.